Providing the chance to indulge your inner Indiana Jones

Ever noticed that sometimes the delectables laid out for consumption at AIA Tucson lectures and events are fancier than the average cookie or cracker? Well, they often are (even if you haven't noticed). Want proof? Have a look at the following pieces of tasty evidence, prepared by Rosalva Parada, a UA graduate in Honors History and Classics. 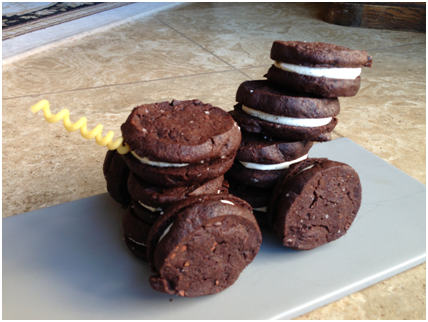 The cookies are made with cacao nibs and meant to emphasize the importance of animals in powering the turn of so many wheels in antiquity…rolling, grinding, carrying….animals moved life.

The cheese tails are sprinkled with thyme (from the Athenian landscape) and fennel seeds (found in Pompeii). They are made with smoked cheese to remind us that animals often unknowingly took their tails to the sacrificial altar. Also, cheese represents an important animal product

For our last lecture, University of Arizona's very own Dr. Kendall told us all about plundered art in Republican Rome, including some classic statues of Aphrodite.  There are rose and raspberry meringues to remind us of the goddess of love and cakes utilizing stolen milk whey to represent plunder.  These cakes don't even need to relate to Aphrodite for everyone to fall in love with them.

Food for the Arena

Ever wonder what life would have been like as a gladiator?  As we have learned from our lecturer Dr. Steven Tuck, it was not all fun and games.  But these snacks are so delicioius, we may start to think otherwise!  The grains of the fig and barley cakes are meant to mimic the sand floors of the arena, while the barley itself reminds us of the grain centered diet that the gladiators had.  With cookies like these, we may start chanting for more bread and circuses!

What better way to enjoy a Pompeiian lecture than with desserts inspired by Mount Vesuvius?  Our treats for Dr. Stephen Dyson's lecture represent the earth and sky on that fatefull day.  Homemade marshmallows take the place of billows of smoke, while delicious shortbread cookies embody the plants that were cultivate at the site.  Don't worry, nothing tastes like smoke or ash, but the flavors are explosive!

And Now for Something Completely Different

Well, sort of!  During the lecture by the University of Arizona's own Dr. Lippman, we learned how Greek comedy and archaeology are related.  And here is what we got to munch on while learning about the Athenian Acropolis!  We have cheese clouds to remind us of the Sicilian cheese that is brought up in The Wasps by Aristophanes.  And if that was not enough, there are also barley cakes shaped like currency bags with a fig and sweet wine filling.  There is nothing funny about how delicious these snacks are

...or maybe you should be!  This granola is specially crafted to help increase brain function and taste delicious too.  Included are walnuts for omega 3, almonds for magnesium, figs for fiber and iron, and cacao nibs for theobromine (a long word for tasty healthiness).  These granola snacks are sold for $5 with all proceeds going to the Tucson AIA chapter in order for us to make more goodies in the future!

Food for thought for our next lecture about Genghis Khan by Dr. Joshua Wright.

To go along with our lecture on Hopi Kachina Religion, some delicious macroons were created.  The flavors of these tasty treats all have meaning in Hopi culture.  Prickly Pear is a famine food, representing survival in a harsh climate.  Pumpkin represents peaceful cultivation plants while chapalote corn symbolizes life.

Pairing up with our lecture on the Hellenization of Cappacocia, here are two desserts created with important ingredients from Ancient Greece.  The biscotti (beneath the cookies) contain olive, almonds, and dried figs, while the cookies contain thyme crystalized in Attic honey.  Both would have been perfect travelling snacks for the ancient on the go! 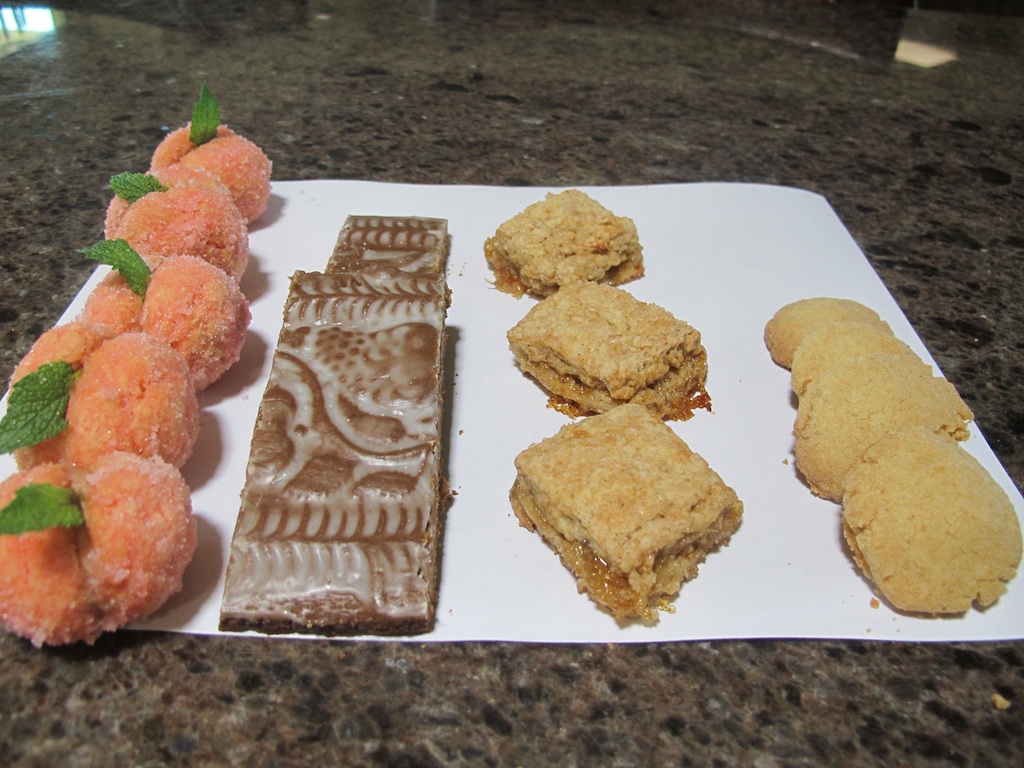 In conjunction with the 2012 installment of the Roman Spectacle, our talented chef put together a winning array of favorites from the past year (top photo), plus at least one new creation inspired by the event itself. These new cookies (bottom photo) are created with kamut flour and are meant to resemble the sand, Latinharena, in Roman amphitheaters that gave its name to the arenas we frequent today: 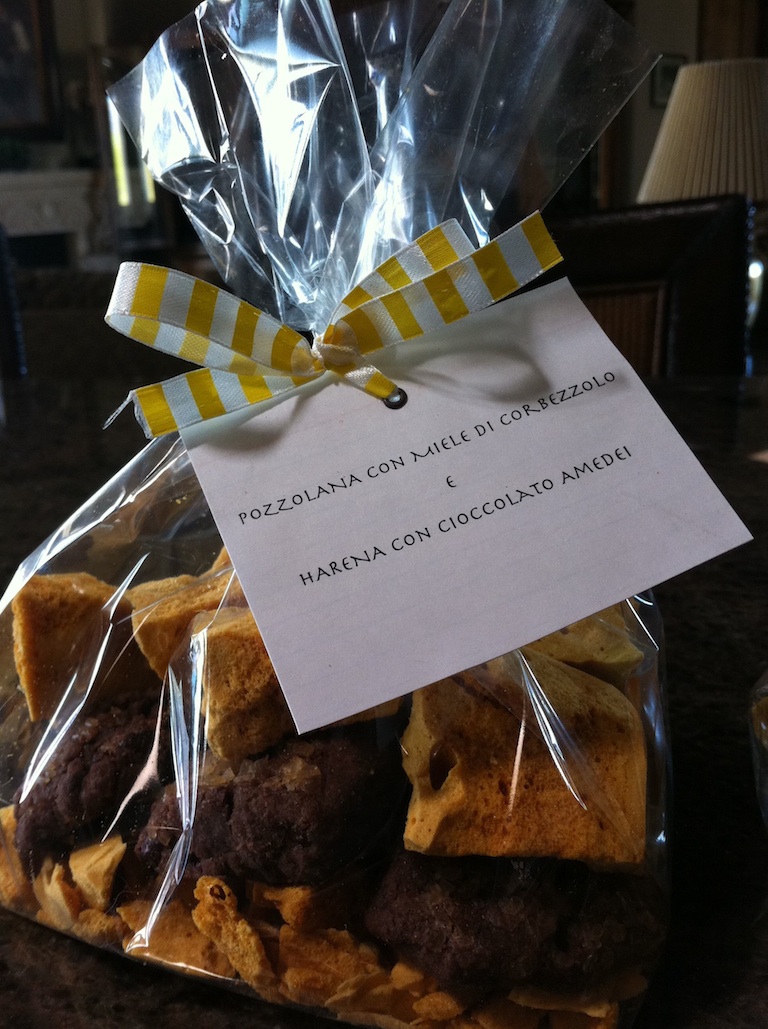 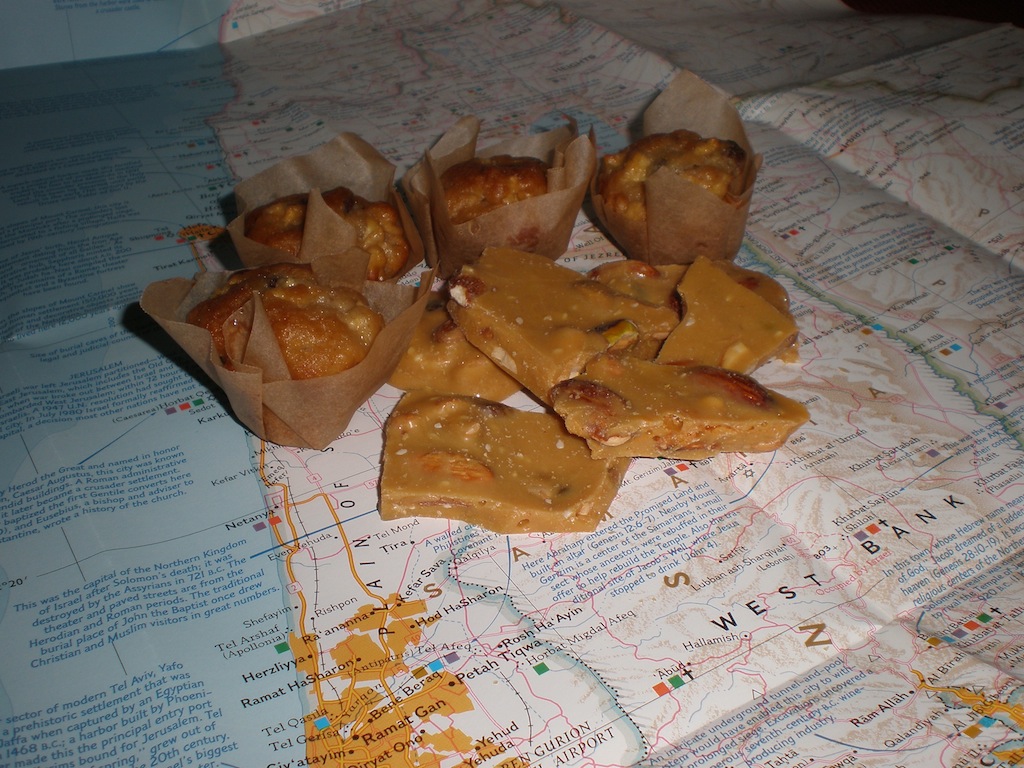 The Brittleness of Empire

The brittle below, a featured nosh at the March 26, 2012 talk by Getzel Cohen, is composed from products that represent the expanse of Alexander's influence. It features cashews (known to be from India), sesame seeds (from Egypt), almonds (from the region of Jordan), and pistachios (first recorded by Theophrastus during Alexander's travels and introduced then into Mediterranean culture). The brittle likewise suggests how the empire shattered, to fall into the hands of his generals. 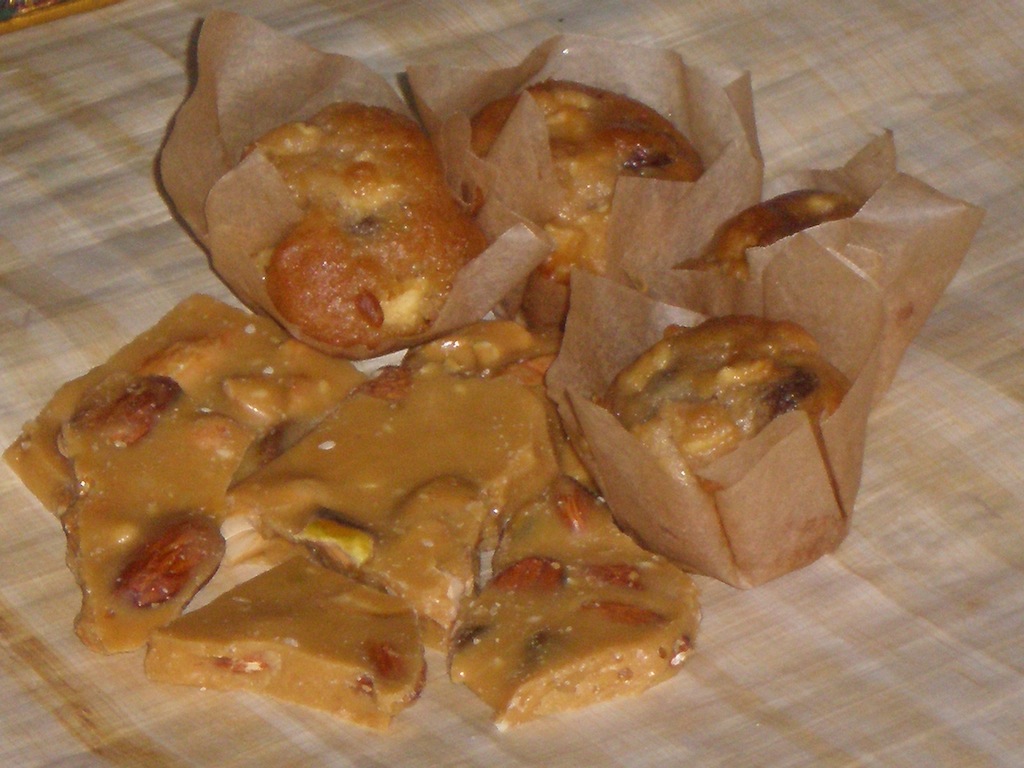 The muffins flanking the brittle display the Hellenization of the Mediterranean through the use of apples (reputed to be Alexander's favorite fruit, especially Babylonian ones), ample quantities of olive oil (one of the earliest Greek exports), raisins produced in Jerusalem and poached in Macedonian wine, then, finally, laced with the honey that united all of the Mediterranean as the sweetener of choice. A bite-sized empire of cosmopolitan flavor! 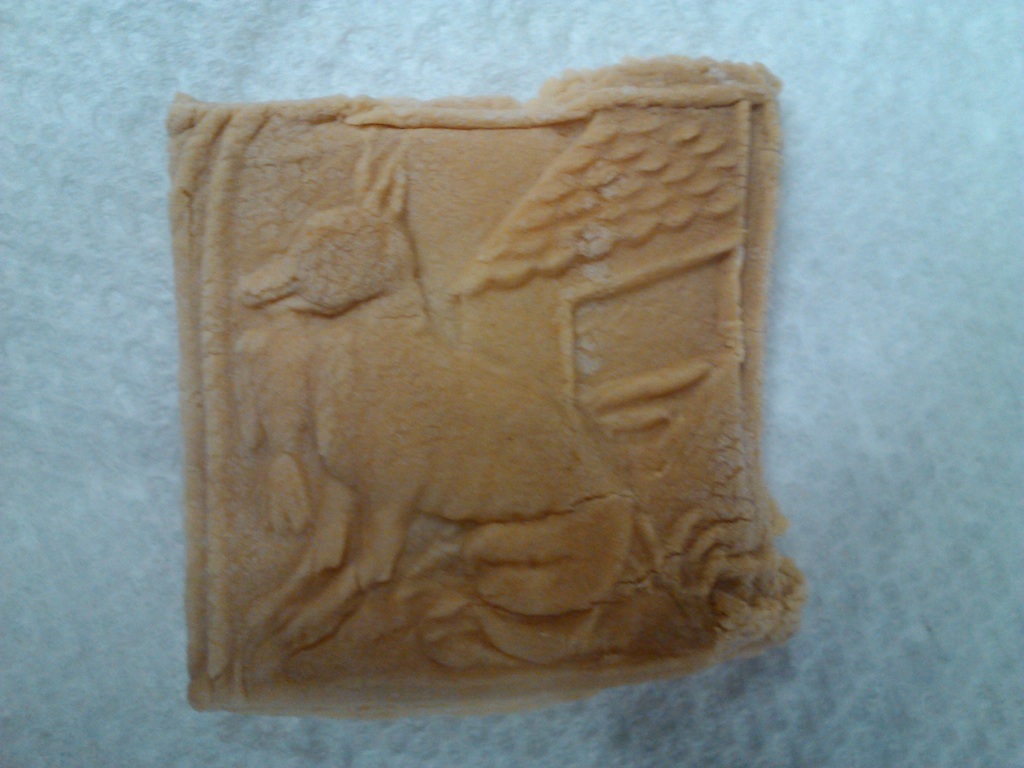 These formed part of the spread at the reception for the lecture on Roman provincial sculpture given by the UA's own Stacey McGowen on November 2, 2011: More provincial biscotti. Can you find the one which doesn't belong? Here's a hint: it doesn't have a fox on it. This spice cookie represents the Roman predilection for conveying messages through depictions in relief, especially political messages. The floral motifs and images of abundance here are meant to recall those on Augustus’ Ara Pacis. These cookies are also amply outfitted with costly spices, such as black pepper, to draw the attention and greed of neighboring barbarians. 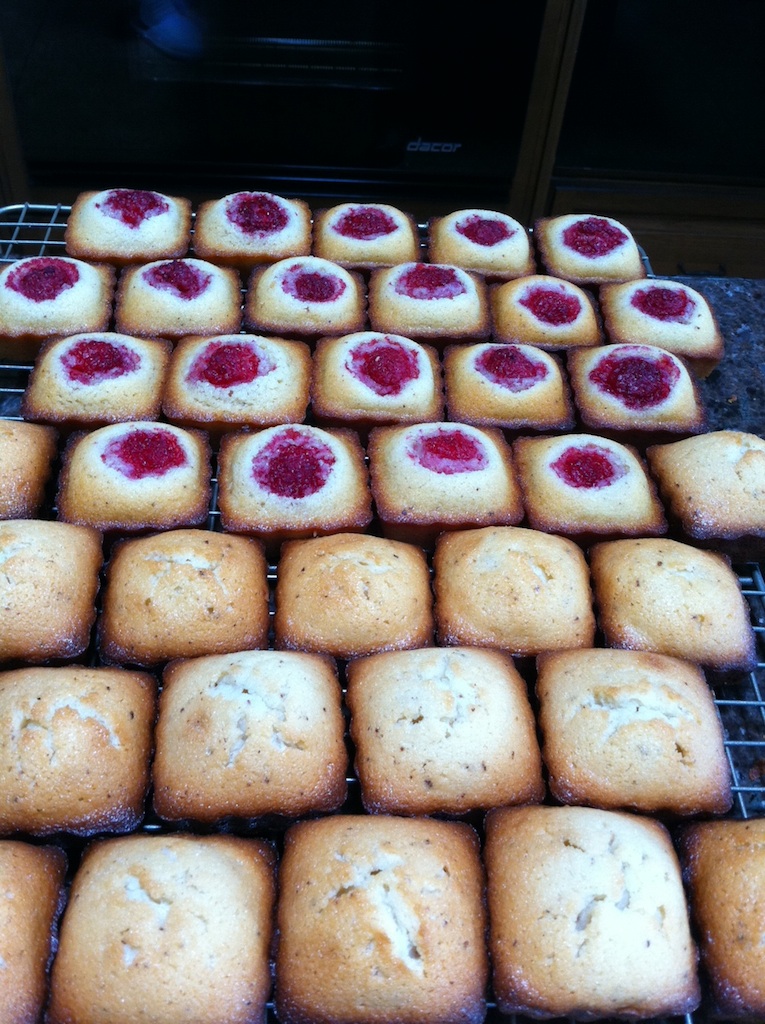 These financiers are fashioned like paving blocks; since the French originally created them to represent gold ingots, it seems very fitting to pave the Roman roads, such as the Via Appia, in gold for the triumphant advent of an emperor: 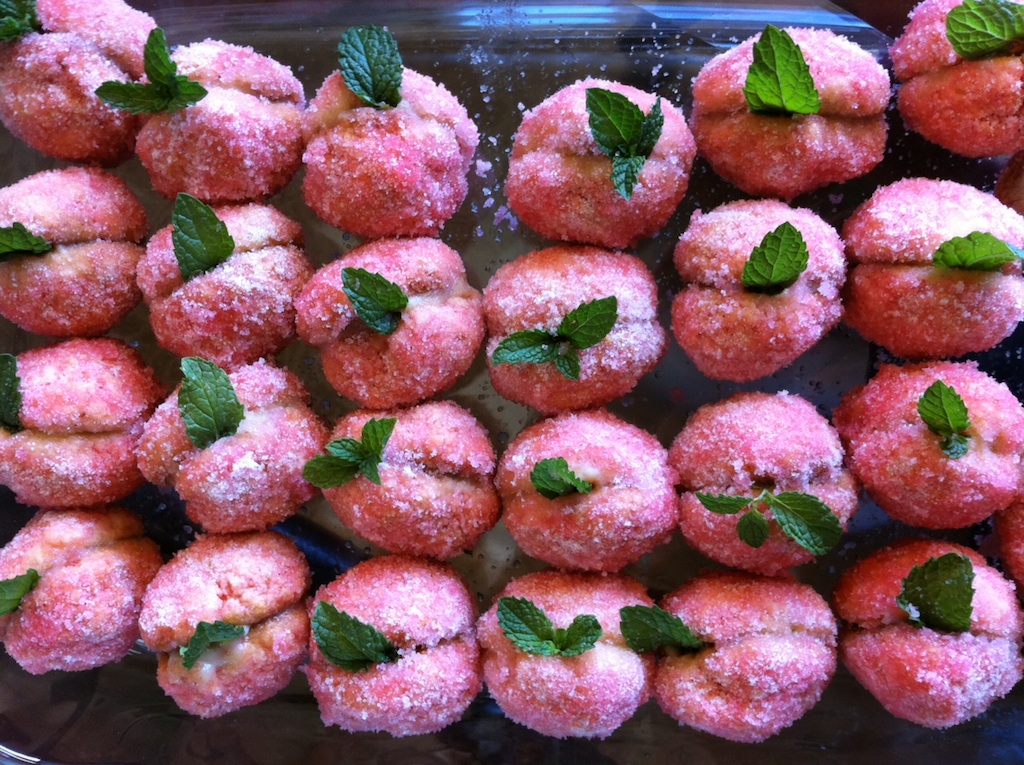 These cookies convey the aroma of the Mendesian unguent that was used in classical antiquity to anoint feet. The "peach" is scented with cinnamon, cardamom, and myrrh and then rolled in sugar. They are created in the style of Apicius and 1st century A.D. Roman cooking in that they are artistically contrived to resemble peaches out of other ingredients like the pit, which is an almond resting in the center. The presence of the peaches also represents the power of the benefactor in purveying them since they would have been originally sourced from the extremities of the empire in Persia or the surrounding areas: 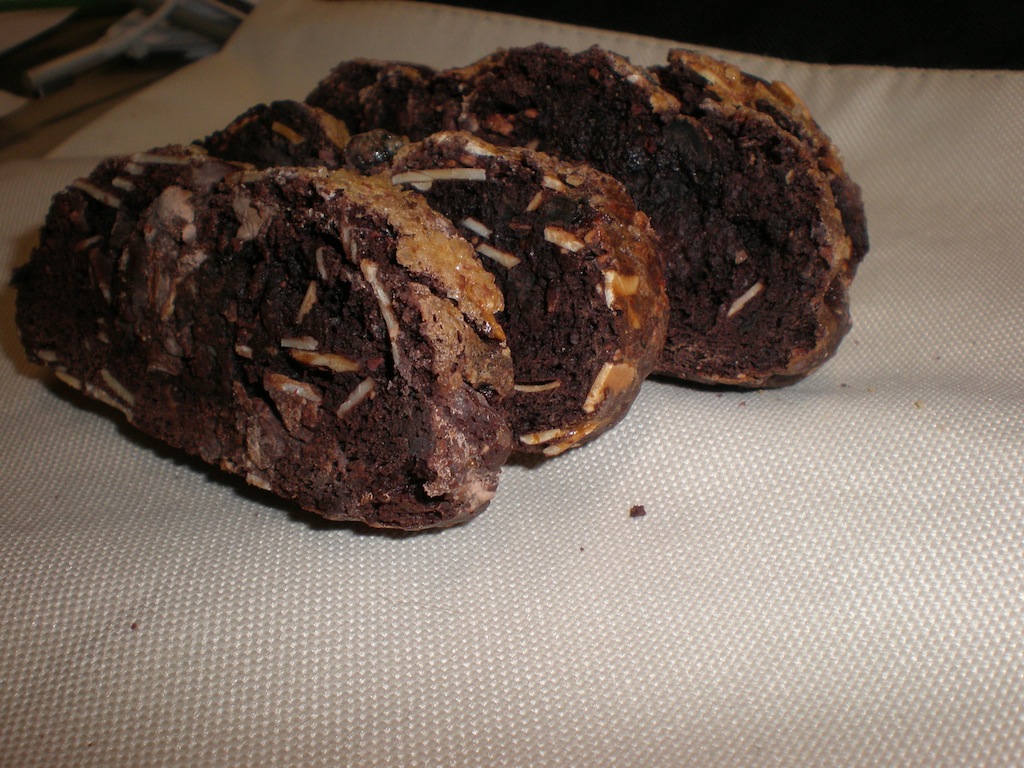 These black olive and cacao nib biscotti, from the November 29 (2011) lecture by Arizona's own Steve Kuhn, represent the bridge between the old world staple (olive) and the discovery of (new world) chocolate. Biscotti are also designed to travel well. 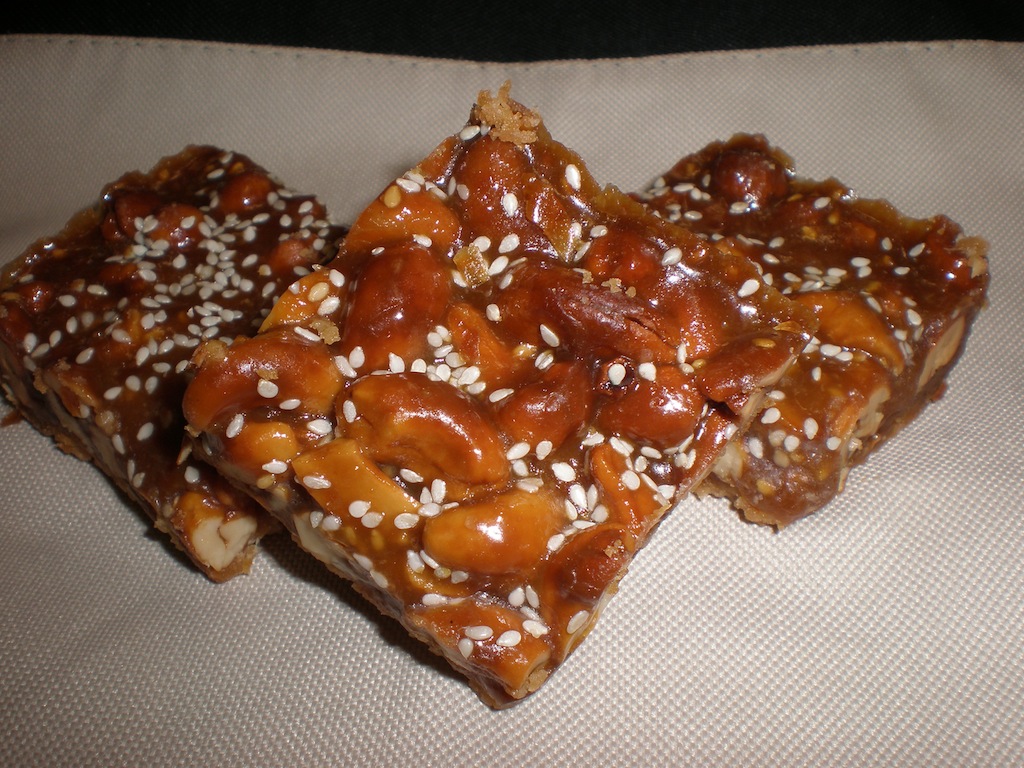 These cashew honey caramel bars, also from the November Kuhn-fest, characterize the Middle Eastern preference for honey and nut-based sweets and the importance of that influence which descended over most of the Mediterranean and came to take shape in other iconic desserts such as baklava and halva.